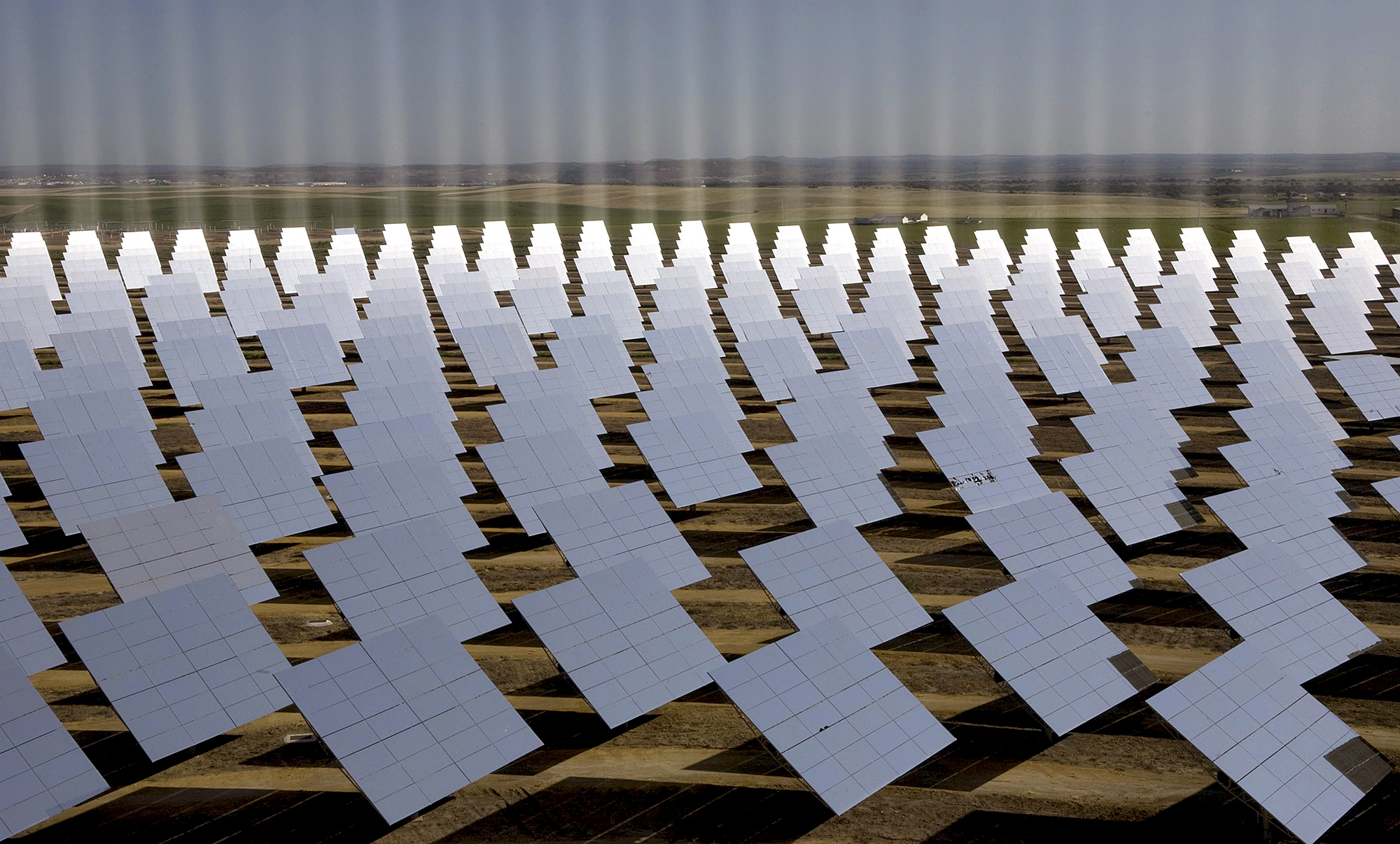 For years, wind and solar power were derided as boondoggles. They were too expensive, the argument went, to build without government handouts.

Today, renewable energy is so cheap that the handouts they once needed are disappearing.

On sun-drenched fields across Spain and Italy, developers are building solar farms without subsidies or tax-breaks, betting they can profit without them. In China, the government plans to stop financially supporting new wind farms. And in the U.S., developers are signing shorter sales contracts, opting to depend on competitive markets for revenue once the agreements expire. 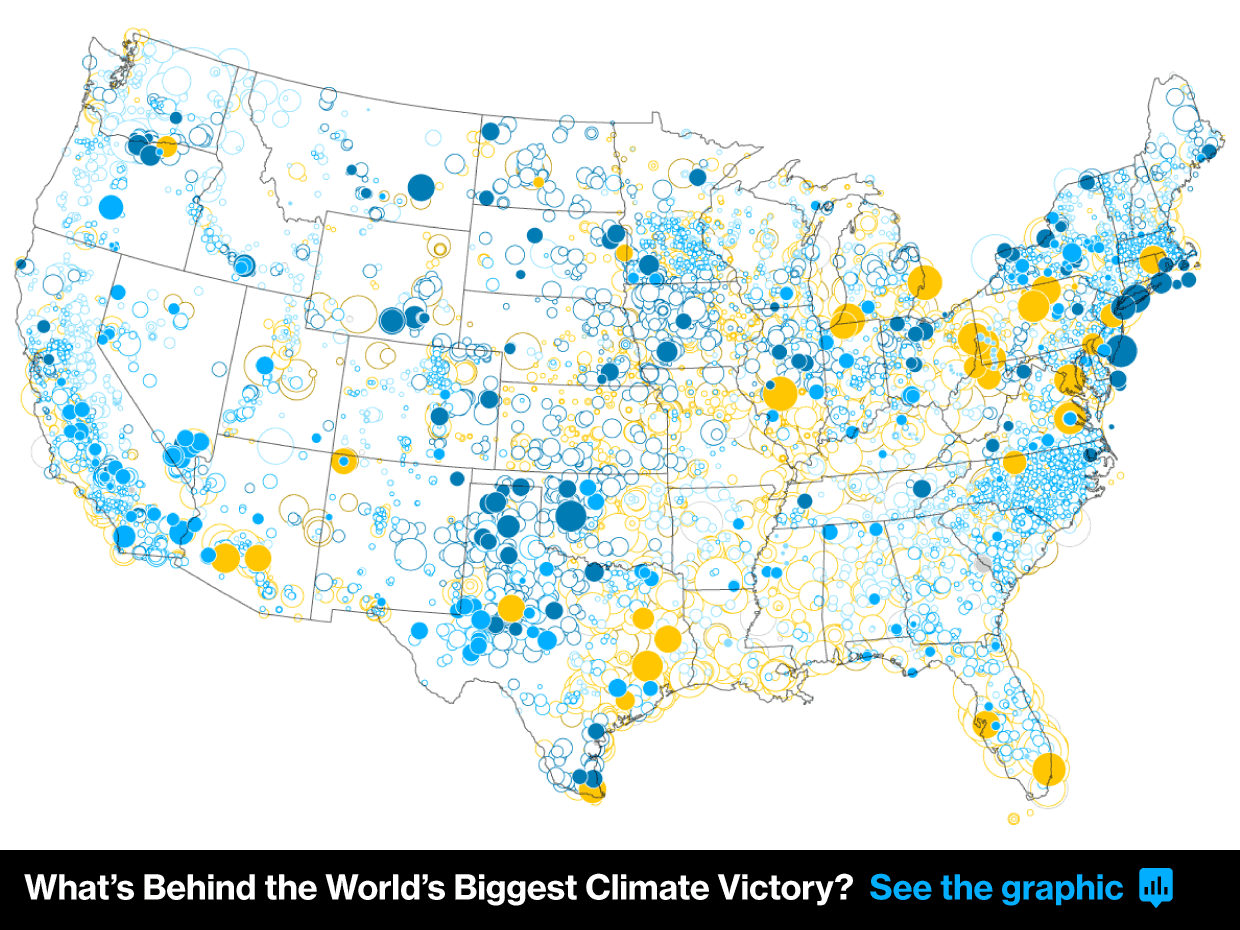 The developments have profound implications for the push to phase out fossil fuels and slow the onset of climate change. Electricity generation and heating account for 25% of global greenhouse gases. As wind and solar demonstrate they can compete on their own against coal- and natural gas-fired plants, the economic and political arguments in favor of carbon-free power become harder and harder to refute.

“The training wheels are off,” said Joe Osha, an equity analyst at JMP Securities. “Prices have declined enough for both solar and wind that there’s a path toward continued deployment in a post-subsidy world.” 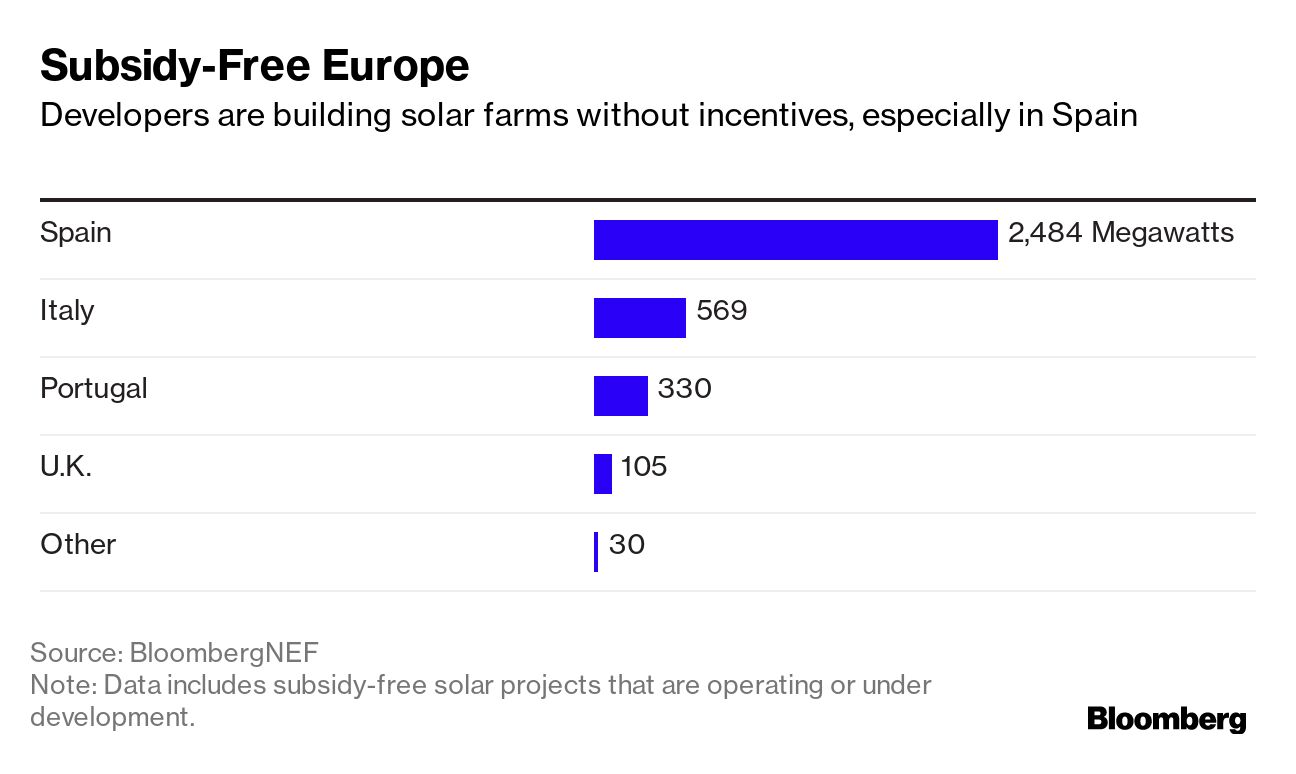 The reason, in short, is the subsidies worked. After decades of quotas, tax breaks and feed-in-tariffs, wind and solar have been deployed widely enough for manufacturers and developers to become increasingly efficient and drive down costs. The cost of wind power has fallen about 50% since 2010. Solar has dropped 85%. That makes them cheaper than new coal and gas plants in two-thirds of the world, according to BloombergNEF. 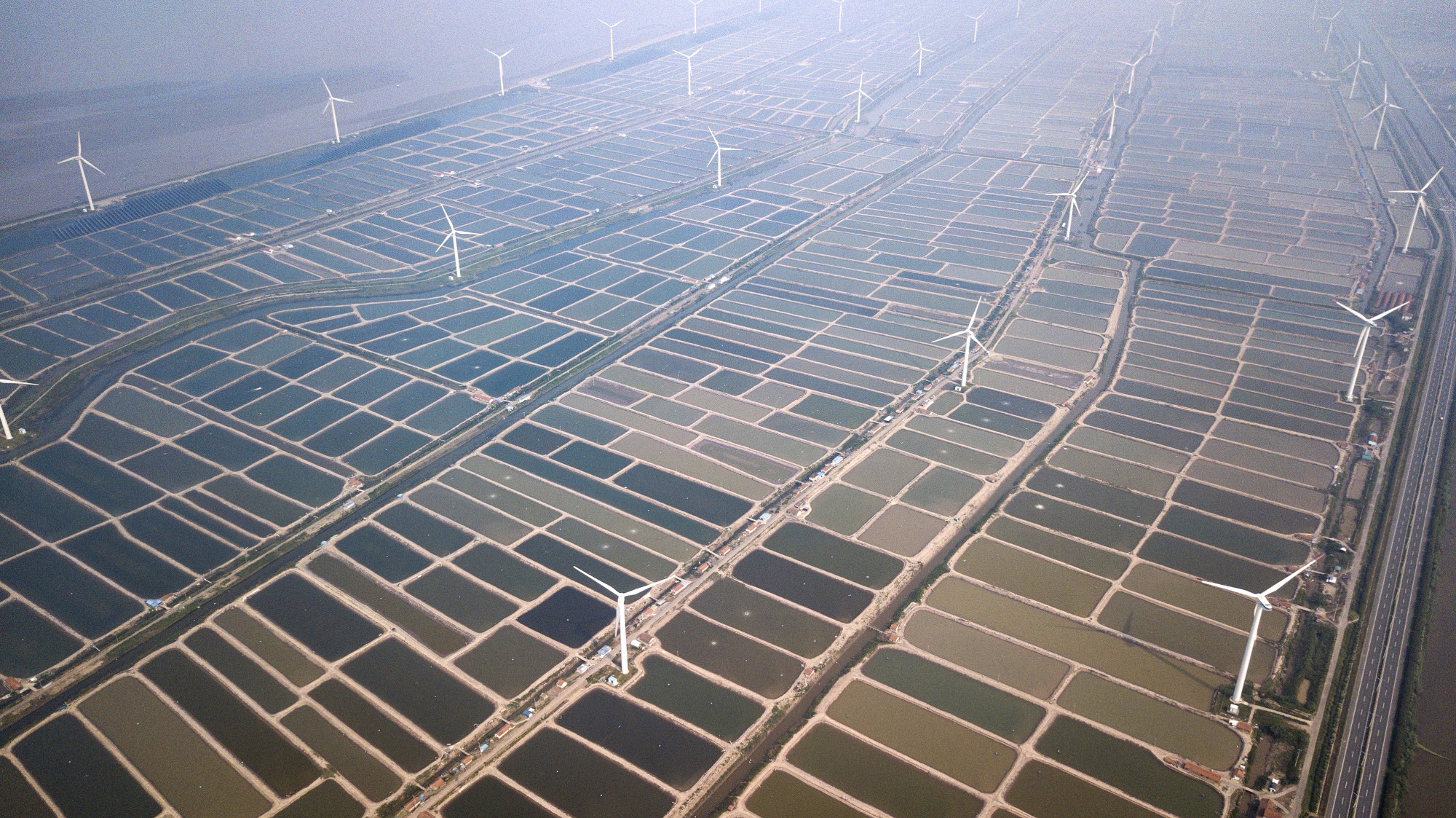 Wind turbines spin in Qidong, China.
Photographer: Qilai Shen/Bloomberg
Yet for all it’s promise, clean energy still has a long way to go before fully usurping coal and gas. Wind and solar still only accounted for about 7% of electricity generation worldwide last year, according to BNEF. And most wind and solar projects still depend on subsides. In the U.S., in fact, the solar industry is pushing to extend federal tax credits that are scheduled to decline over the next few years.

And then there’s the issue of round-the-clock power. Solar doesn’t work at night. Wind farms go idle when breezes slack. So until battery systems are cheap enough for generators to stockpile electricity for hours at a time, renewables can’t constantly provide power like coal and gas.

Perhaps nowhere is the push toward subsidy-free clean energy clearer than on arid expanses of Southern Europe. About 750 megawatts of subsidy-free clean-energy projects are expected to connect to the grid in 2019 alone, across Spain, Italy, Portugal and elsewhere — enough to power about 333,000 households, according to Pietro Radoia, an analyst at BNEF.

“The cheapest way of producing electricity in Spain is the sun,” Jose Dominguez Abascal, the nation’s secretary of state for energy, said last year.

The road to subsidy-free renewables wasn’t easy for Spain. A decade ago, it offered developers a lavish feed-in tariff, prompting an uncontrolled boom that strained the national treasury. Spain slashed incentives and now has a hands-off energy policy.

China, the world’s largest renewable energy market, also propped up wind and solar for years. Now it’s shifting toward a more market-driven approach. Earlier this year, officials announced a plan to develop 20.8 gigawatts of renewable projects that can only profit from selling electricity into grids at prices equal to or less than coal. Plus, most wind farms built on land — as opposed to in the ocean — won’t be eligible for subsidies after 2021. 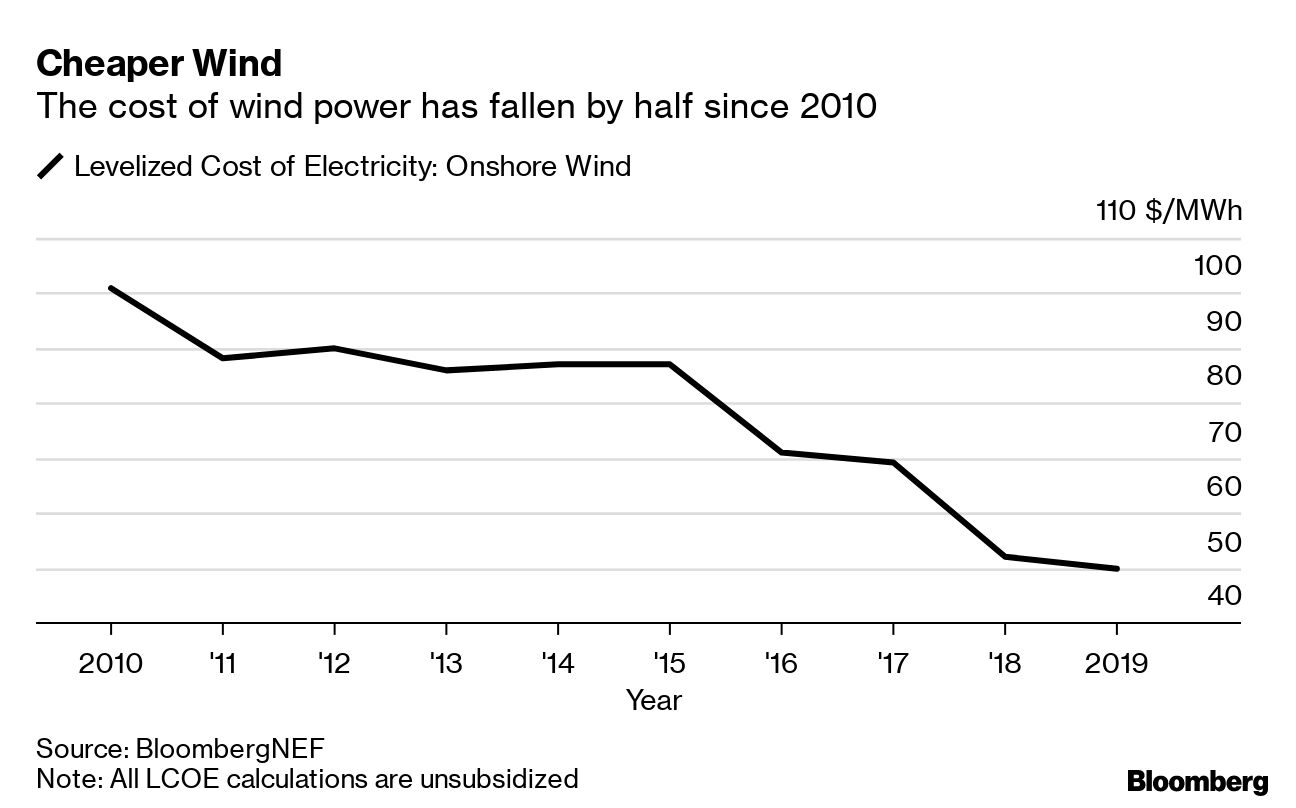 The picture is less clear in the U.S. Nearly every American wind and solar project remains eligible for subsidies through federal tax breaks, which are scheduled to decrease or phase out altogether over the next few years. Plus, dozens of states have renewable-energy quotas, forcing utilities to buy a certain amount of wind and solar.

Still, they’re starting to compete on their own. The proof is in the sales agreements. For years, clean-energy developers needed 20- or 25-year power-purchase contracts to ensure a return on investment. Now they’re building wind and solar farms with agreements for 15 years or less — with the expectation that projects will compete against gas- and coal-fired plants in wholesale markets after the deals conclude.

(Michael R. Bloomberg, the founder and majority stakeholder of Bloomberg LP, the parent company of Bloomberg News, has committed $500 million to launch Beyond Carbon, a campaign aimed at closing the remaining coal-powered plants in the U.S. by 2030 and slowing the construction of new gas plants.)

This story is part of Covering Climate Now, a global collaboration of more than 250 news outlets to highlight climate change.

@rsrenewables
RS Renewables Ltd stores and uses personal data to be able work with you in relation to a contract we have/are working to put in place with you or the company you represent, or to investigate whether you would be interested in working with RS Renewables Ltd. Please see our info